This will always be a matchup to exploit as the Falcons defense allows huge yardage and reception totals to the RB position. The Saints have the ultimate back out of the backfield in Alvin Kamara. Pay up for Kamara in DFS.

The Eagles front is stellar but they have holes in their secondary, especially against the big play variety. TY Hilton is one of the best big play receivers in the league. Make sense to start TY as the Eagles are susceptible to double moves and blown coverages. Julio Jones ate against them in Week 1 for 10 catches for 169 yards and DeSean Jackson got behind them for 129 and a score.

The Saints defense through the first 2 weeks looks like the old 2016 version. Marshon Lattimore and company have their work cut out for them against the high flying Falcons offense. The Saints are making a switch at cornerback with P.J. Williams subbing in for Ken Crawley who has been a liability in the secondary. Julio Jones is a must play but the sneaky play is Calvin Ridley who was targeted 5 times last week, catching 4 passes for 64 yards and a TD.

As much as the Chiefs offense have been clicking, the defense have given up 200 more yards than they’ve produced. In other words, they’ve sucked. Targeting the 49ers offensive weapons in a potential shoot out is good money. Jimmy Garoppolo, Matt Breida, George Kittle and Marquise Goodwin are the big names here but don’t sleep on Pierre Garcon, Dante Pettis and Alfred Morris.

The Lions run defense is a matchup to exploit as they’ve allowed the Jets and 49ers to rush for an NFL leading 362 yards collectively. Now to the hard part, which Patriot Running Back is the best option. In a perfect world all 3 can give you good fantasy value as James White has averaged 10 targets per game, Rex Burkhead can get in the end zone, and Sony Michel led the Patriots in carries last week. If I owned any of them, they would be in my lineup in this excellent matchup.

Jordan Howard and the running game hasn’t quite broken out like they planned thus far in 2018, but the Cardinals defense is just what the doctor ordered. Cardinals gave up 182 rushing yards to the Redskins in Week 1 and gave up 3 TD’s to Todd Gurley in Week 2. A positive game script for a Bears team that is favored by 5 points means more carries and scoring opportunities for Howard and Tarik Cohen. 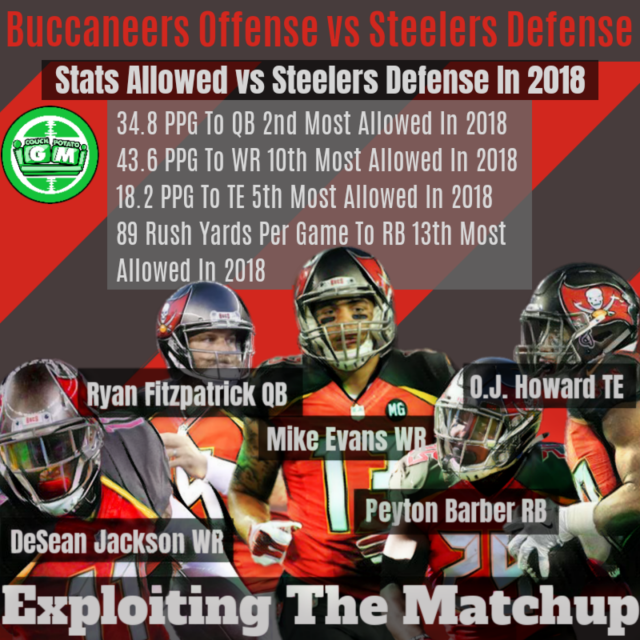 Monday Night Showdown is an excellent matchup to exploit as two high powered offenses face off against each other. The Steelers defense allowed 6 passing touchdowns to Patrick Mahomes last week and now gets to play against a quarterback that is leading fantasy football in scoring. FitzMagic is back so fire up the entire Buccaneers offense.

No Dalvin Cook clears up Latavius Murray to have a huge game against the porous Bills defense. Also as CPGM Drew stated, the Bills offense is so bad, that opposing offenses will have plenty of opportunities to score TD’s. Kirk Cousins, Kyle Rudolph and the best receiver duo in football, Adam Thielen and Stefon Diggs are great plays as long as the game don’t get out of hand too early. 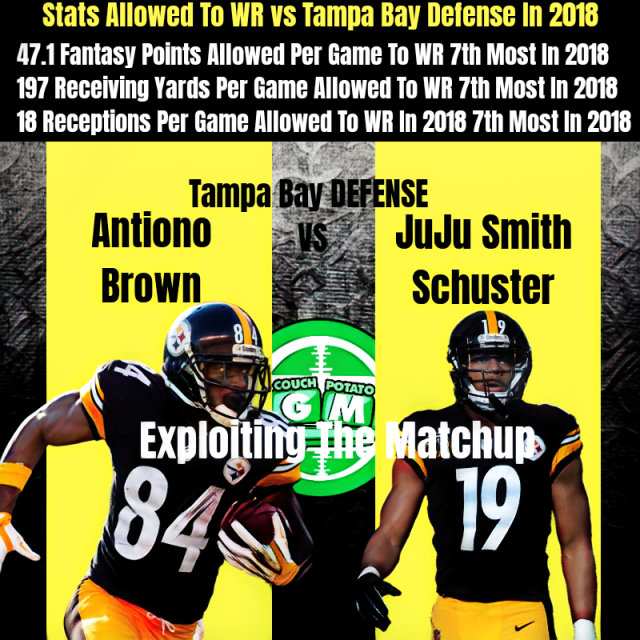 Just like we suggested exploiting the Steelers defense above, the Buccaneers defense can be taken advantage of also. Starting corner Brent Grimes should be back but Carlton Davis, Ryan Smith and M.J. Stewart will have a hard time keeping up with Antonio Brown and JuJu Smith-Schuster. 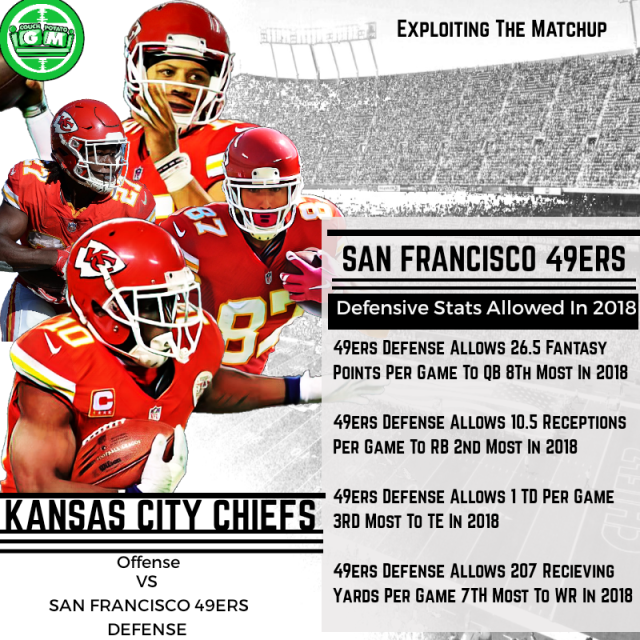 The Chiefs offense are pretty much must plays at this point as Andy Reid’s offense is clicking with Patrick Mahomes getting the football down the field to their playmakers. Teams haven’t figured out a way to get pressure on Mahomes to throw him off rhythm, and it probably won’t happen this week again the 49ers. Start all your Chiefs, even last year’s rushing leader Kareem Hunt as this could be his breakout performance of 2018.

About the Author – Matthew Lee Lotshaw makes infographic picture designs for marketers with a story to tell or a product to promote. My goal is to help everyone tell the story better with an infographic that can bring the information alive. More than ever before, the visual aspects of well-crated infographs can make data memorable and understandable in a way that few other forms of media can.